This article on Acupuncture for Tibial Stress Syndrome (Shin Splints) by Matt Callison, L.Ac. was printed in the Journal of Chinese Medicine in October 2000. The information contained in this article is still relevant today.

Forty athletes, ages 18-45 with tibial stress syndrome (shin splints), were analyzed using subjective questioning based on a ten point Likert-type pain scale that was used to assess pain level. The scale ranged from None (1) to Distressing (5) to Unbearable (10). The athletes were divided into three treatment groups: Sports Medicine (N=17), Acupuncture (N=12) and a combination group of Sports Medicine and Acupuncture (N=11). The treating practitioners were certified and student athletic trainers at University of California, San Diego RIMAC Athletic Training Center along with acupuncture interns supervised by the author from Pacific College of Oriental Medicine, San Diego. The study took place over a 3 week period, with each participant filling out an initial questionnaire (Intake) prior to the first week of treatment. Follow- up questionnaires were utilized at the beginning of each week of treatment for the remaining 2 weeks (Follow-up 1 and Follow-up 2). Participants answered questions concerning intensity and duration of pain during and between activities, in addition to dosages taken of anti-inflammatory medications (NSAID). Participants in all groups received a mini- mum of 2 treatments per week. The three treatment groups were compared to each other: Sports Medicine (S), Acupuncture (A) and Acupuncture and Sports Medicine combination (AS). All athletes reported an increase in effectiveness of treatment from Intake to Follow-up 2, regardless of the treatment group they were in. Athletes in the A and AS Groups received the most pain relief, were least hindered by pain during sporting and non-sporting activities, and felt overall that the treatments were more effective than those reporting in the S Group. The perception of pain, pain relief, and effectiveness was not significantly improved for athletes in the S Group. Athletes taking anti-inflammatory medications in the AS and A Treatment Groups took significantly fewer doses during the course of the study than athletes in the S Group.

From professional to recreational sports, running is a common activity in which tibial stress syndrome becomes a primary complaint of lower leg pain. In treating this syndrome for over 15 years from both a western and eastern view, the author felt the importance of performing a study on this frequent injury. The research described below was designed to answer the basic question: Over the duration of the study, did athletes who received acupuncture perceive a decrease in shin splint pain and increase in activity level compared to athletes who received standard treatment?

Tibial Stress Syndrome (Shin Splints) is a common lower leg injury that affects many people involved in running sports. Shin splint is a vague term used widely with a variability of definition. It is synonymous with anterior or medial tibial stress syndromes, tendoperiostitis, tibial periostitis, and tibialis tendinitis, all of which denote varying degrees of soft tissue and osseous changes. It is an over-use injury and inflammatory condition of the tibia or fibula in which micro tears develop in the muscle’s myotendinous origin located along the bone shaft. The repetitive action of dorsiflexion/plantar flexion pulls the muscle away from its attachment on the bone causing periostitis. This condition is commonly seen when a runner increases mileage, changes to a harder running surface or adds hill running. Pain usually begins shortly after the onset of running and can last into non-activity days. Often, athletes will make successful changes to alleviate their pain such as wearing different running shoes and/or incorporating new strengthening and stretching exercises. When these changes do not ameliorate the pain, common over-the-counter anti-inflammatory medications are often used and, at times, taken excessively. Unfortunately in many cases, an athlete who “runs through” the pain or masks the pain with anti- inflammatory medications, may eventually develop bony stress reactions or micro-fractures (medullary line or cortical abnormality) from the repetitive stress.

Localized bony tenderness is the most obvious indication for tibial stress syndrome. In more severe cases, physical examination may find redness, swelling or thickening of the periosteum and/or juxtapostional soft tissue. These signs may be present at the site of a stress fracture in which the diagnosis is primarily made from clinical assessment. However, if the diagnosis is uncertain, various imaging techniques may be used to confirm osseous changes as seen on a radiograph or bone scan.

Medial Tibial Stress Syndrome involves the tibialis posterior muscle and often occurs in individuals who are moderately to severely pronated (collapsed medial arch or flat feet), thus placing tension on this posterior muscle and tendon. Pain and tenderness are generally found on the posterior medial aspect of the tibia between Zhongdu LIV-6 and Sanyinjiao SP-6. In some cases, the pain may extend up to Yinlingquan SP-9.

The efficacy of acupuncture in treating musculoskeletal syndromes is becoming apparent by the increasing amount of research directed toward it. In preparation for this study, a past review of any similar research was needed. A limited amount of information was found concerning the use of acupuncture on tibial stress syndromes. In searching from 1978 to 2000 in The Journal of Chinese Medicine, no articles were found using search terms acupuncture, tibial stress syndrome, shin splint, compartment syndrome and stress fracture.

Description of the Study

Forty athletes were diagnosed with tibial stress syndrome by the author and certified athletic trainers. Diagnosis was based on physical examination of localized tibial tenderness on participants involved in running sports. Stress fractures and compartment syndromes were ruled out. All participants were analyzed using subjective questioning based on a Likert Pain Scale. They were divided into three treatment groups: Sports Medicine (N=17), Acupuncture (N=12) and a combination group of Sports Medicine and Acupuncture (N=11). Treatment group descriptions are as follows. 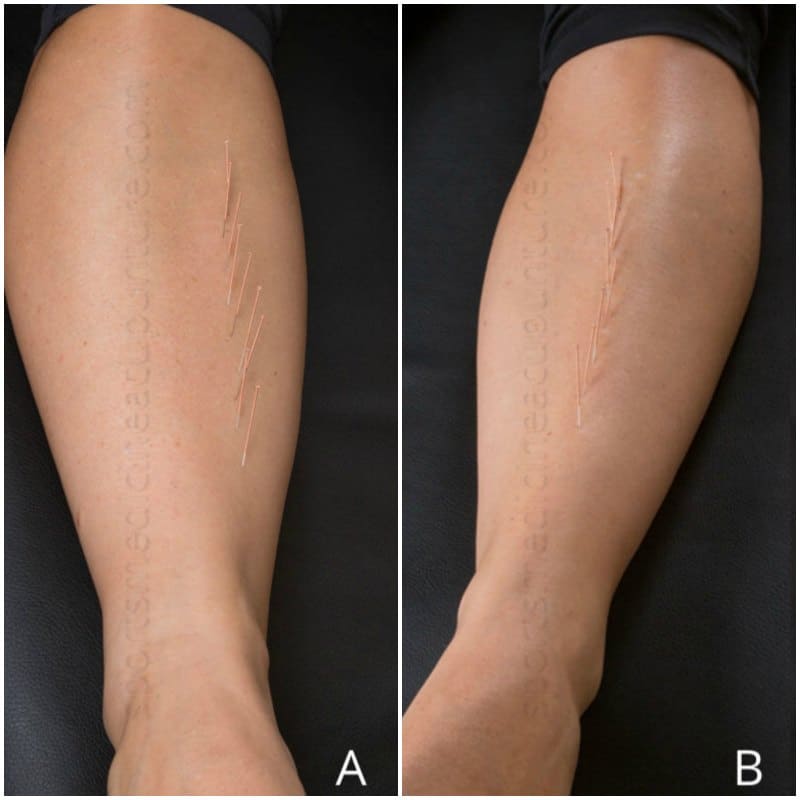 Acupuncture Group: The primary treatment, developed by the author, was directed at the edge of the tibia where micro-tearing of the affected muscle takes place. The anterior edge was treated when the tibialis anterior was affected, with the medial edge treated when the tibialis posterior muscle was involved. Between 10 and 15 #34 or #36 gauge needles were threaded transverse-oblique and subcutaneously along the edge of the tibia between the soft tissue and bone (Fig. 1). Motor points of the soleus, gastrocnemius, and tibialis anterior were also used, in addition to two-three palpable ahshi points along the medial arch between Taibai SP-3 and Zhaohai KID-6. A motor point is defined as the site where the motor nerve enters the muscle and the skin located directly above this region.

Other points were chosen at the practitioner’s discretion to balance and remove obstruction from the channels. These additional points included: Zusanli ST-36, Yanglingquan GB-34, Yinlingquan SP-9, Diji SP-8, Taixi KID-3, Feiyang BL-58, Ququan LIV-8 and Taichong LIV-3. Five minutes of tuina massage techniques followed the acupuncture treat- ment. Moxibustion and electric stimulation were not used.   Acupuncture and sports medicine group: A combination of both types of treatment were used. Treatment modalities utilized would vary based on time available and concern for “over treating” the injury. Understandably, not every modality was used during each treatment as the athletic trainer and supervising acupuncturist discussed what techniques would be appropriate. Acupuncture, tuina, and facilitated stretching were the consistent modalities used along with one or two others mentioned above.

Forty participants were involved in this study with ages ranging from 18-45 years. Thirty six attended UCSD and participated in athletic teams which included track and field, cross country, volleyball, basketball, lacrosse, ultimate frisbee and soccer. Four others were recreational runners and not associated with UCSD. Gender was not recorded. About half (N=23) of the athletes wore orthotics. They were asked to continue using their orthotic corrective devices if they were already wearing them, or not start using them during the duration of the study. Analysis indicated that the use of orthotics was not significant be- tween treatment groups.

The study took take place over a three week period. Each participant filled out an initial questionnaire (Intake) prior to the first week of treatment. Follow up questionnaires were utilized at the beginning of each treatment week for the remaining 2 weeks of the study (Follow-up 1 and Follow-up 2). Participants answered questions concerning intensity and duration of pain during and between activities, in addition to dosages taken of anti-inflammatory medications (NSAID). Participants received a minimum of two treatments per week. The results of the subjective questioning were analyzed using a multivariate analysis of variance (MANOVA). The dependent measurements for this study were the participants’ self-report of the items listed below by question number

The independent variable was Treatment Group (S=Sports Medicine, A=Acupuncture, or AS=Combined). Each of the dependent measures were assessed three times (Intake, Followup1, & Followup2). Multiple comparisons were made at each time interval (Intake, Follow-up 1, & Follow-up 2) to evaluate intra-group differences. The following is the results reported by question.

Frequency of primary sport. There were no differences between Treatment Groups (F(4,70)=4.0, p=.79) or over the three time intervals (F(2,35)=.5, p=.61) for Sport Frequency. This indicates that athletes in each group participated in their sport at approximately the same level of activity.

Effect of pain after sport activity. Less hindrance by pain after sport activity was reported by 91.7% of the athletes in the A Group, 72.7% in the SA Group, and 47.1% in the S Group. The affect of pain after sports activities significantly decreased from Intake to Follow-up 1 to Follow-up 2, but the amount of decrease was different for each Group (F(2,37)=5.0, p<.05). Athletes in the A group reported the least hindrance by pain, but there was no statistically significant difference between the treatment groups (A vs. S, p=.16; A vs. SA, p=.23).

Acupuncture appears to be an effective modality for relieving pain associated with tibial stress syndrome (shin splints) and for reducing reliance on anti-inflammatory medication. Athletes in the Acupuncture and Combined Groups received the most pain relief, were least hindered by pain during sporting and non-sporting activities, and felt that the treatments were effective. The perception of pain, pain relief, and effectiveness was generally unchanged for athletes in the traditional Sports Medicine Group. Anti-inflammatory medication use decreased over the duration of the study in the Acupuncture and Combined Treatment groups. Due to the small population involved in this study, the results show only preliminary tendencies. A larger pool of people would need to be analyzed in order conclude validity. The use of Sports Medicine modalities alone has successfully cured thousands of athletes with this syndrome and is used as a primary treatment source in western based clinics. However, this study does indicate enough statistically significant evidence to view the use of acupuncture as a viable treatment source.