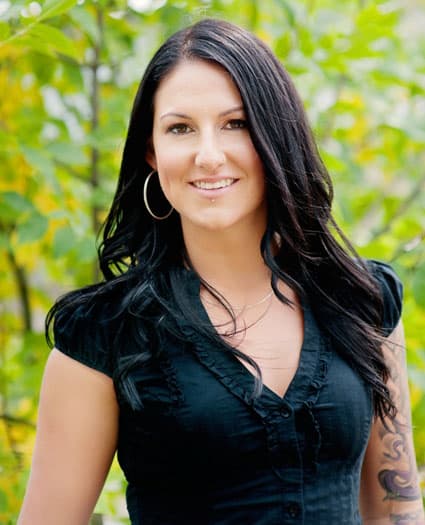 Adrienne Coombs, TCMP, C.SMA completed the SMAC program in October 2015, and is now a practicing sports acupuncturist in Squamish, British Columbia. Here she shares a case study of a UFC fighter who came to her for regular maintenance, then a significant knee injury.

“I’ve been practicing in Squamish, BC, which has been labeled as the outdoor capital of Canada. Being here has allowed me to focus my practice mainly on athletes as everyone here spends their free time enjoying the outdoors biking, hiking, climbing, skiing, snowmobiling, all the normal mountain activities.

Surprisingly, there is a huge community of martial artists—JuJitsu, kickboxing, and MMA fighters. The local gym, “The Sound,” has produced world class fighters with a few even participating at the UFC level and amongst these is Jamey-Lyn Horth. With a 5-0 record she’s Canada’s #1 female MMA fighter in her weight class.

While living in Northern Alberta for several years while attending the SMAC program, I was close with several fighters, two of whom competed at the UFC level (one of which is still fighting in the heavyweight division). I was able to practice all my freshly learned skills from SMAC on these fighters and, by doing this, I learned a great deal about the common imbalances, common injuries, and what’s the most important treatment that acupuncture and Chinese medicine can give, regardless of whether they’re injured or not at the time.

There is a laundry list of consistent irregularities I saw with these fighters, the most significant and usually present was pelvic imbalances from their dominant stance. The pelvic asymmetry filtered up the spine to where there were numerous other significant imbalances seen in every plane of movement in the shoulder and neck.

Three years ago, when I moved to Squamish and heard about Jamey, I was really excited to meet her and tell her about my experience in hopes I would be able to take her on as a sponsored athlete.

The Covid Pandemic put a dead stop to her fighting, but she continued to train the last two years to be fight ready at any point; this included biweekly acupuncture treatments throughout her training.

For her “general maintenance,” we focused on balancing her pelvis, which was pretty out of whack, probably due to having little professional treatment prior to seeing me.

With her dominant stance, her right hip was raised a good inch higher than her left, with significant anterior tilt and sitting in a forward rotation. By balancing her pelvis, we noticed drastic changes in her range of motion with her kick, her kick strength, and overall torso rotation. Feeling good and confident, Jamey received a call for a headlining title fight against a well known Brazilian fighter in the Legacy Fighting Alliance (LFA) promotion in Minnesota.

Jamey ended up dominating the fight by TKO and winning the title of “LFA flyweight belt holder.” However, at the beginning of the fight she got caught in a nasty leg bar that had her stuck for a few seconds, but, once out, got up and defeated her opponent with no problem. Although she easily won, she did end up significantly damaging her knee.

The MRI results showed the following:

“Significant injury to the popliteus muscle and tendon is identified. There is a high-grade partial tear of the popliteus muscle tendon near the myotendinous junction with appeared near complete although a few fibers remain intact. Marked edema is present throughout the muscle. Extensive soft tissue edema extends superiorly in the popliteal fossa. Moderate-sized joint effusion is present.

A partial tear of the LCL is identified. The tear appears to involve approx 50% of the width of the ligament.

Near complete tear of the PCL is identified involving the superior attachment. The inferior margin remains intact. ACL is normal. No other remarkable findings.”

The surgeon asked that Jamey use a PCL brace 24/7 for 12 weeks, would recheck and assess every four weeks, and was fairly confident that her LCL was stable enough to support the brace to avoid surgery. The surgeon also recommended continuing with acupuncture every 5-6 days.

I was working with a physio throughout Jamey’s healing and treatment went really well with Jamey healing extremely fast and ahead of schedule. My treatment plan was to focus on maintaining balance in the pelvis along with the PCL and LCL needling protocols, and the most reactive motor points in the hamstring, quads, gastroc, peroneals, and of course needling the popliteus. Needling the popliteus motor point always had an intense reaction and it made the whole area feel really achy but after every session Jamey always felt huge improvements.

Jamey had been meeting with her surgeon every few weeks and has always appeared to be healing more quickly than anticipated. Two weeks ago, the surgeon said that she’s roughly 2-3 weeks ahead of schedule, which means that now she only wears her brace while she’s training. In the weeks she’s been back to training full time, her progress is getting exponentially faster. Other than a bit of weakness in her knee, she has no more pain.

The SMAC program has transformed my practice. This education I received has made the biggest impact on my career as an acupuncturist, more than any other training I’ve completed. It has given me the tools to understand the body to properly diagnose and treat almost any orthopaedic ailment that comes through the door. Equally as important, it has allowed me access to a massive community of support to call on with questions or guide me with any uncertainty I may have with difficult cases. The strategies and protocols I learned with SMAC I used on my patients has resulted in incredible positive changes to the athletes.

Truthfully, without SMAC I would not be anywhere near where I am currently am in my career.”

To connect with Adrienne Coombs, visit her C.SMA Directory Listing.